A review of their album 'Flock' 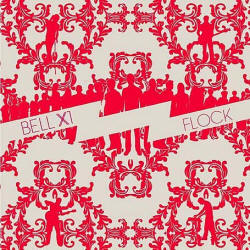 Review Snapshot:
Let's get one thing straight; I will not say that this is the album that will make or break Bell X1 (like every other hack in the known Irish universe). In my humble opinion, they should've had all this attention for 'Music in Mouth' but no, nobody listened to little ol' me?

Full review:
With a funkier sound and songs road tested to the approval of their fans, Bell X1 are currently doing no wrong. They're a solid live band bringing a twisted verve to performing and all you have to do is look at Paul Noonan's sweaty shirt for proof. From the winding intro of 'Reacharound' to the sorrowful fadeout of 'Lamposts', they've made another album of riches, like its predecessor.

Their sound has merrily progressed, in rockability and the hand-clappy-disco of the delectable 'Flame'. If you do not have the urge to dance during this song THERE IS SOMETHING WRONG WITH YOU! The audacity to sing something as cheesy as "I want to be near you and blink in your light / and toast marshmallows on a cold dark night" and actually get away with it just shows that Bell X1 is not afraid of branching out of the indie pigeon-hole.

The spiritual side arises throughout, particularly in the fan favourite 'Rocky took a Lover' where an alcoholic defends his way of life in a rather sentimental manner. Its lyrics - and those of 'Bad Skin Day' - are much more confident and it seems that Noonan isn't trying as hard to sound unique as on Music in Mouth.

Musically the band have found their power chords in 'Reacharound' and 'He Said, She Said'. 'First Born for a Song' on the other hand, with its jazzy piano, isn't so much a dancey number as much as it is a declaration of how bothersome it can be to suffer from writer's block.

The closing track 'Lamposts' is a beautiful lament about hurting someone you love rather than letting them go. Filled with blood and symbols (and an inspired bit of Irish thrown in for good measure) it builds up and stops right after the final chorus, letting you take in the refrain of "I've been walking you into those lamposts again / I'd rather do that than let go of your hand". It's right up there with 'I'll see your heart and I'll raise you mine'.

Well, Flock was No.1 in the Irish charts for about three weeks, and if you haven't bought it yet you're simply missing out on one of the more worthwhile releases from an Irish band this year.