A review of his album 'The Big Picture' 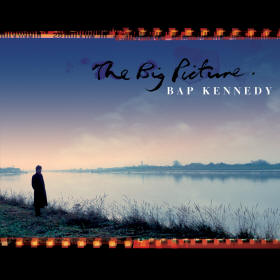 Review Snapshot:
A-list Americana songwriter Bap Kennedy comes roaring back into the frame with his latest album thanks to some stirring songs and a little help from his legendary friends.

Full review:
I first came across the music of Bap Kennedy in 1991. I was sitting in the kitchen of my then girlfriend's flat one Sunday morning, wearing her dressing gown, eating her cornflakes and watching some video music show presented by Dave Fanning on her television. Suddenly, the film for Energy Orchard's 'How The West Was Won' burst onto the screen. This brilliantly realised clip featured the band playing in front of a giant cinema screen onto which was projected an old Hollywood Western then, in the manner of 'The Purple Rose of Cairo', the band members and the cowboys changed places. Yet, what was more amazing than the visual effects was the song itself. 'How The West Was Won' juxtaposed the imagery of the American West with the troubles in Northern Ireland and, even today, lyrics like, "Pass the ammunition there's something going on / Another crazy politician wants to give me a gun", have lost none of their relevance. Right there, I became an admirer of the author of that tune and later that same day went out and bought the album it was on, 'Stop The Machine'.

Little did I realise that I was not the only one who appreciated Kennedy's writing chops. A certain Steve Earle out of Fort Monroe, VA had already noticed this Belfast Cowboy back in 1988 and had promised Kennedy during a drink-fuelled discussion in the Marquee Club that, "someday Skinny, you're coming to Nashville to make a country rekkid. And I'm gonna produce it". After a spell in Orange County Jail some time later, Earle made good on his promise and Kennedy embarked on a fateful trip to Nashville where he soon found himself recording with people such as Nanci Griffith and Jerry Douglas.

Fast forward to the present day and Kennedy's latest release 'The Big Picture', which demonstrates that his song writing has developed in pace with his ability to forge working friendships with stellar talent such as Van Morrison and Shane McGowan, both of whom are formidable masters of the songwriter's craft themselves. Even the fact that the album is on the hip 'Loose Records' label, home to artists such as The Handsome Family and Willard Grant Conspiracy, speaks volumes about Kennedy's qualities as an artist.

I have to say that listening to 'The Big Picture' was akin to picking up the phone and hearing the voice of an old friend that I haven't spoken to in years. Songs such as 'The Truth is Painful' and 'Streetwise' have their antecedents in earlier material such as 'My Cheating Heart' whilst the glorious sweep of 'On The Mighty Ocean Alcohol', with its guest vocals courtesy of Shane McGowan, moves forward Kennedy's thesis that the Irish invented country music. Elsewhere, Kennedy's brand of Americana blends seamlessly with Van Morrison's Celtic Soul mysticism on the co-written, 'Milky Way'. Kennedy frames these songs within a lush, smooth, honey and grits production that ebbs and flows much like the sound of waves on a beach.

The record also demonstrates how far Kennedy has developed his gift for expressing complex ideas within a superficially simple lyric. For example, in 'The Beautiful Country', he sings, "I'm on the road boys / Travellin' all the time / But I've never seen a country / As beautiful as mine". It took George Bernard Shaw an entire speech to express the same thing at the end of 'John Bull's Other Island'.

Overall, this fine record by one of Ireland's foremost musicians is another milestone in the ongoing fusion of Irish and American musical forms which began when the traditional Irish ballad 'Bard of Armagh' first found its way to Texas in the 1870s.