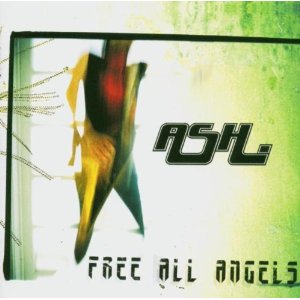 Ash, the band that promised so much and delivered so little. Will they at last deliver the album that their superb early singles promised? Well, nearly but not quite. You desperately want this to be good, you really really hope that it will be good but in the end you're left thinking about other bands: Irish bands, with bigger guitars and lyrics free from the playground poetry that Ash, and in particular Tim Wheeler, seems to thrive on. "Free All Angels" will sell by the truck load, whilst Turn's far superior "Antisocial" lies lonely on the shelves of your nearest second hand record store alongside dozens more Irish guitar bands lost in the name of the "major label". Ah well, that's show business. If Ash were one of the four elements, they'd be water. For "Free All Angels" is ultimately a watery affair that's about six tracks too long.

It opens promisingly enough, "Walking Barefoot" is another superb Ash love song. "Shining Light" follows and is as catchy as hell, even if it was annoying when it first came out. Three songs in and they've lost the plot. "Burn Baby Burn" is the typical teenage rubbish that puts the bands weaknesses to the fore and makes bands like Blink 182 seem mature. Is Tim Wheeler still aged 17? From 'Burn Baby Burn's' 'teenage twilight' and 'birds that can't be united' playground poetry ramblings you'd be forgiven for thinking so. Add in forth song "Candy" and you definitely think so. 'Candy' could be a boyband ballad it's that bad. A mess of orchestrations and a drummer losing the run of himself after every verse are only just the start of the horrors that this weak-as-chalk song exposes. Add in the American lyrics of teenage sleepless nights and you get the idea. Closing track "World Domination" is an Oasis style joke song that ultimately is a cringe worthy attempt at being, you know, all tough and manly. "We are the new sensation / calling to the whole population / so spread the word across the nation / we're gonna bring your heart palpitations" is a mere indication of how bad this song is. Sure, it's probably a joke, but in world where the punk ethic died the moment the Clash recorded "Cut the Crap" and the Americans "discovered" the genre, it's a sad sad attempt at reviving the comedy "we are god" ethic. And, naturally enough, it's written by Tim Wheeler.

Ash are obviously Tim Wheeler's baby but therein lies the problem. On "Free All Angels" he writes most of the lyrics and most of the music and, it's sad to say it, but he is their weakest link. He's trying desperately to be the next Joey Ramone, but the simple fact is that he's not cut out for it. Maybe as a rocker he's a hard livin' / hard drinkin' machine (the picture of him on the sleeve skulling a bottle of vodka in a bath tries further to bolster his rock credentials) but doing his job (singing, writing, playing the guitar) he is, no matter how hard the rest of the band try, out of his depth. He is the human Kit Kat ad (albeit with the looks) - can't sing, can't play, can't write even. Every song is an observation that says nothing, a trap that even The Ramones didn't fall into. If he's not pulling the trigger of love or running through his mind trying to come up with another girl to annoy himself about, he's on a beach somewhere being the punk Glen Medeiros. Sure, it's happy escapeful stuff, but there's no substance, and no matter how many girls become candy or cherry bombs there's simply no fun to be had. When he lets the "others" have a pop at a song, the results are (un)surprisingly very good. Drummer and Travis Bickle wannabe Rick McMurray contributes "Submission", a distorted, sleazy three and a half minutes that steals the album. Bassist Mark Hamilton gets two chances to impress (on the quickfire "Shark" and murderous "Nicole") and it's here where the aggression that Wheeler strives for comes through with conviction. Hamilton in particular showed that form on the b-side to "Shining Light" where his "Gabriel" song gave the a-side a serious run for its money. Other than that though, it's come as you are time for Ash. Mindless, idiotic, soulless and in the end just plain annoying.

Still, it's not all doom and gloom. Once or twice Wheeler hits the target. On "Sometimes" they move back into "Goldfinger" mode and despite it's lyrical weaknesses ("cigarettes keep you skinny and your mind off the rain" anyone?) Wheeler crafts a worthwhile song. "Someday" is one of the the finest things Ash have ever written (and that's not saying much), and it's lyrics give you a clue that Ash really do want to be in America. They have been there before of course. On their last misguided album "Nu-Clear Sounds" they thought they were American with "hilarious" results. They want to be somewhere else on "Someday", somewhere "safe from harm". If they calmed Tim Wheeler's ego down then they would be safe from harm. Despite the crafty packaging and the ground breaking CD mixer included in initial quantities, "Free All Angels" is a watery and limp third album from Ash. Sure, it's a sizzling summer collection of poppy punk hits, but ultimately it's been done before, and done far better. "We're here to speak our mind / we won't take up too much of your time" they pipe on "World Domination" - sadly, if speaking their mind involves the playground poetry that is "Free All Angels" then it's time for a drastic rethink.

That CD Mixer in full: With "Free All Angels" you get the Ash Video Mixer. A feature that, to be honest, is better than any song on the album. The Video Mixer is an interactive computer programme which enables the purchaser to mix their own videos to the album tracks from a substantial gallery that comprises video clips and stills. Footage ranges from studio scenes, backstage footage, out-takes, live shots, on-the-road scenes and all sorts of band related stuff. You can doff the director's cap and create your own video for each individual song on the album and if you want share it on-line with other die-hard Ash fans. Ash are the first band to release this sort of software with an album so count yourself lucky.

Check out a more positive review of 'Free All Angels' by another CLUAS writer.