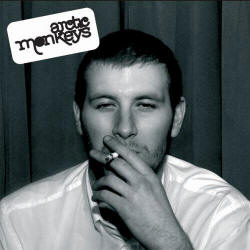 Review Snapshot: The release of the Arctic Monkeys' debut album sees the emergence of an exciting new talent that could grow into one of the giants of the music world. It's a pity then that the rest of his band are so poor and make some incredibly uninspired sounding music to ruin the whole thing. At least they're a million times better than The Rakes.

Full Review:
I'm going to start this review by making a promise. This sentence contains the only instances of the following terms and phrases you will read in the next 600 or so words; hype, internet, the NME, voice of a generation, capturing the zeitgeist, new marketing paradigm, and finally, squirrel. I think that it'd be nice to be able to read a review of this album that only talks about the music for a change.

And that's really where we hit our first stumbling block, musically "Whatever People Say I Am That's What I'm Not" isn't exactly the most exciting or interesting record ever committed to tape / Pro Tools /whatever it was recorded with. The album showcases a collection of vaguely punkish rock n' roll songs with hooks coming out the ying yang that sounds marginally better than what is being produced by a whole host of British bands doing the rounds right now who are doing the exact same thing as bands from 20 odd years ago. It sounds positively spartan and is entirely without nuance however it doesn't even try to disguise how unsubtle and flaccid it is, rather it seems to revel in its straight forwardness and use of clich?, as though having a little bit of fire in your belly is enough to make a song worth listening to. Unfortunately a 'little bit' is nowhere near enough to make up for what is lacking in the Arctic Moneys' music.

The one saving grace in the whole affair is frontman Alex Turner. Singing in his own Sheffield accent Turner has all of the qualities that are sorely lacking in the music that he sings over; passion, intelligence and perhaps most importantly of all, balls. A genuinely gifted lyricist with a caustic tongue in the tradition of other great Northern English songwriters such as Jarvis Cocker and Morrissey, Turner's true gift which sets him apart is his ability to believably write about the external events and people that he comes across, the album's one truly great song "When The Sun Goes Down", about the girls, the pimps and Johns that are to be spotted around Sheffield's red light area at night is an astonishing piece of observational songwriting and Turner almost single-handedly manages to drag his band away from the pack of groups that, without him, they would be right in the middle of.

Having said that Turner at 19 is by no means the finished article as a songwriter and there are numerous instances of meaningless "yeah yeah"s and uncomfortable sounding clauses roughly shoehorned into the lyric ('A Certain Romance's "that's what the point is not" for example) to fit a metre but as he hones his craft in the coming years he could well wind up being one of music's most important voices in the next 15 years.

To be honest I'm not sure how I feel about "Whatever People Say I Am That's What I'm Not", at times it sounds uninspired, clich? and pedestrian. Were the band older than they are no slack would be cut for them on that score and really none should be cut for them now, Amusement Parks On Fire's Michael Feerick was little older than The Arctic Monkeys are when he made a wonderfully expansive album back in 2004. At the same time there are times when I'm left in awe of Alex Turner's ability to turn a phrase. But ultimately you have to judge this as a whole package and good as the lyrics are I've got no desire to listen to them being sung over the music that's on offer here.

Check out a more positive review of this album by CLUAS writer Una Mullally.