A review of his album 'First Thought Best Thought' 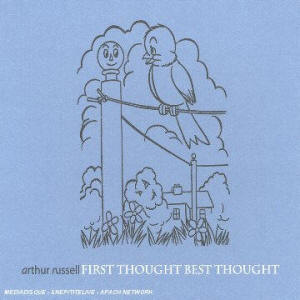 Review Snapshot:
A little piece of the 20th Century worth preserving.

Full review:
Ever felt a bit out of your depth? That's pretty much how I felt when the review copy of this double album compilation popped though my letterbox. Put it down to an over-developed sense of curiosity. My first thought when I saw this on the list of albums for review was "who the hell is Arthur Russell?". I had to find out more. A quick Google search revealed phrases like "disco pioneer". Great! There definitely isn't enough disco albums on Cluas, how hard can reviewing this be? So perhaps you can imagine I was a little surprised to find that this compilation doesn't feature Russells' dancefloor exploits, but rather another, earlier side to his prolific music career. It consists entirely of avant-garde instrumental pieces, reflecting his "serious" academic music credentials. It's all getting a bit "Wire" reader chin-strokingly serious. Oh dear.....

Perhaps it's something of a masterstroke of track sequencing then, that this compilation is front loaded with the warmer, friendlier, easier to relate to pieces, simply titled "instrumentals 1 & 2". They welcome you in to a wider world like a down to earth yet incredibly smart friend who could explain the basics of quantum physics without making you feel stupid. In fact, it almost feels like familiar territory for the average rock listener. Each instrumental is of roughly typical rock song length. That said, the whole composition was originally intended to be performed as a 48 hour cycle, not sure how that'd work, but I'd imagine it'd involve industrial quantities of "special" coffee (milk, 3 sugars, half a gramme of speed**).

Many tracks sound reminiscent of John Cale era Velvet Underground, but this is hardly surprising considering that Russell was a cellist and electric cello features pretty heavily. These pieces differ from the Velvets' sound in that they feel much lighter and airier. Woodwinds flutter between the beats like butterflies between blossoms 'neath a glistening sun. Some of the pieces start and stop pretty abruptly, this apparently is entirely deliberate.

Maybe it's just my short attention span, but something pretty bizarre happens after you listen to "instrumentals" for a while. No matter how hard I tried to concentrate on the music, I just kind of stopped listening and allowed it to drift pleasantly into the background. That would sound like a criticism if I didn't add that something equally bizarre happens sometime after you stop listening. I found musical phrases from the piece would just briefly pop randomly but incredibly vividly back into my mind, especially during moments when I wasn't thinking of anything in particular, kind of like an irritatingly catchy pop song you'd hear on the radio in the morning that keeps going round in your head all day. Maybe this is what Russell meant when he described these pieces as hinting at "the popular radio sound of the future", or maybe he was just the kind of guy who'd say anything to get you to listen, who knows?

After instrumentals, things get a little more "challenging". Disc one concludes with a sparse and dissonant piece called "Reach One" performed on two Fender Rhodes electric pianos. It's definitely Donal Dineen, 1:30AM type material, OK to just let wash over you while you drift in and out of consciousness, but pretty hard to purposely sit down and listen to. My brain hurts, time for more "special" coffee and onto disc two I think.

Disc two opens with "Tower of Meaning" which I really don't know what to make of. Initially it's really grating in parts, you know where it grates so much your chest tightens and you get the urge to skip on a bit? Yet in other parts it's incredibly beautiful and poignant, not entirely dissimilar to Arvo Part or Gorecki. The more times you listen, the more accustomed the ear becomes to pieces that initially seem to grate. Maybe if I listened long enough I could appreciate it as a whole, but as it's title suggest, it seems like a huge tower, hard to get any real perspective on from down here. You get the feeling that repeat listening is worth the effort, but it's probably going to take a long time before you reap the full rewards. The abrupt stop/start editing found on "Instrumentals" is also present here. The disc concludes with "Sketch for the face of Helen", an electronic piece with Russell playing a Keyboard and Tone Generator over a recording of a tugboat.

At this stage people who actually know what they're talking about when it comes to music are probably feeling that this review has done a man who is regarded as one of the 20th century's more gifted composers a huge disservice. They're probably right and to be honest I'm pretty relieved to be able to give listening to this a break. Yet at the same I time, as corny as this sounds, I'm really glad to have had the opportunity to have been exposed to Russell's work. It feels like an artefact worth preserving, which when you consider it, is exactly what Audika Records have done. Without the stellar job they've done of mastering this release from vinyl (no master tapes exist for most of the pieces), this music genuinely could have been lost forever and that really would have been a shame.

*This score has been calculated accurately to six decimal places using a source of random Brownian motion for reference (or in plain english, reflecting on it with a nice cup of tea, I really can't take another coffee)

**legal disclaimer/morally responsible bit: Cluas does not endorse, encourage or condone the consumption of amphetamine laced beverages, or coffee for that matter. It raises your blood pressure, makes you irritable and you'll be up way past your bedtime, and no running with scissors either, don't say you haven't been told.