A review of her album 'Poor Horse'

While this particular reviewer has never been a fan (or even a viewer) of Ireland's latest line in bad voyeurism, I can't help but think about Nell McCafferty's recent assertion on that show that too many hopefuls were sounding like Americans. Listening to some of this country's more talented chanteuses would certainly give an indicator that it is not just our native pop star wannabes that are suffering from this particular malaise. 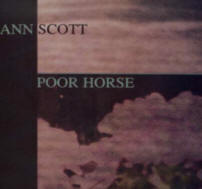 Is this something that hinders Ann Scott's self-released debut album "Poor Horse"? On first listen, it would definitely seem so to a small extent. However, with repeated listening, Scott's voice stands out as something more distinctive; and what originally felt like faux-Americanisms are paradoxically counter-balanced by the somewhat traditional air to the album's lyrics.

Opener "Whistle Tom", with its requiem of "Put a veil on / ten years been and gone", features some charming guitar plucking and a vocal that stretches from rasping to soft. Tracks like "To Adore" and "Wilbur Clown" will almost certainly see comparisons drawn with the likes of fellow Irishwomen Nina Hynes (who appears on the record) and Gemma Hayes (who, in Karl Odlum, shares the same producer).

Some of the lyrics may reek of airy-fairyness. For example, on "Raise Me Up", Ann sings that "she's just swimming with the river garlands". By the same token, there also seems to be something of a poetic nature to her writing, a nature which veers from mystical worlds to rural landscapes.

While there isn't a hell of a lot in musical terms to permit Scott to distinguish herself from a lot of singer-songwriters out there, her unique voice and way of telling a story will give her scope to develop more distinctive songs in the future.

Click here for a review of Ann Scott live in Dublin in June 2001.