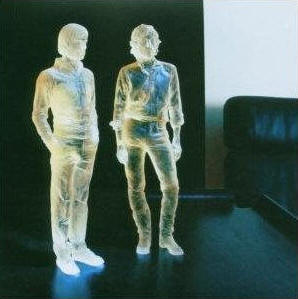 Review Snapshot:
Once again, a new Air album is a let-down - lazy, pretentious and not even interesting enough to be a bad record. It's just boring - elevator music meets elevator flatulence.

Full Review:
It seems that every new Air album since the unloved '10,000Hz Legend' is heralded in advance as "a return to form", "best album since Moon Safari" and so forth.

This time, though, we could almost have believed it - the 2006 non-Air projects by JB Dunckel and Nicolas Godin were quite impressive. Their collaboration with Charlotte Gainsbourg saw them writing strong song-based material instead of the flimsy elevator-music of 2004's 'Talkie Walkie', and Dunckel's solo record was beefed up with punk and electronica. Things looked good for the new Air release.

Alas, it's not to be; 'Pocket Symphony' is insipid, boring and shockingly formulaic.

Right from opener 'Space Maker' we get little other than slight variations on the standard Air sound: one echoing suspended chord on piano, served on a bed of picked acoustic guitar chords, distorted high-pitch vocals and 'whooooosh' sound effects. Far-eastern instruments (koto and shamizen) and navel-gazing lyrics (all 'lost' and 'falling' and time stopping/moving) strive to create a 'Lost In Translation' mood of existential-angst-in-futuristic-oriental-metropolis that by now just sounds old hat.

Even more depressing are the contributions of Jarvis Cocker and Neil Hannon. Both are made to sing in keys that are uncomfortably high for their ranges, and it takes a special kind of genius to make Cocker, the lord of swaggering perv-pop, sound as utterly flat and boring as he does here on 'One Hell Of A Party'.

Meanwhile, on 'Somewhere Between Sleeping And Waking' Hannon's attempt at profound lyrics is nothing more than an embarrassingly trite and clich? exercise from day two of songwriting school - putting opposites together: "Without blindness there is no sight.../...inside prison walls I can find release." Yin and yang, we presume it's meant to be. Such laziness is the hallmark of this unlikeable record.

Whatever about making 'Moon Safari 2', this reviewer wishes they would return to the dark, dangerous edginess of their under-rated 'Virgin Suicides' soundtrack. Unfortunately, Godin and Dunckel have apparently settled for churning out glorified incidental music, the art-house cinema version of all those drippy Snow Patrol songs that accompany death scenes on US medical dramas. What a pity.