A review of the album 'Bachelor No. 2' 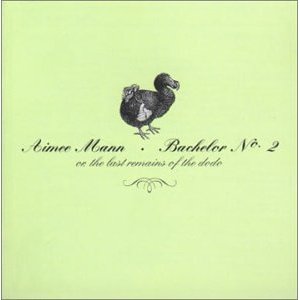 Given some of the dross being currently dished out by the music business one would imagine it'd be pretty difficult to get dropped by a record label. And yet Aimee Mann - after leading quality pop band 'Til Tuesday through the 80s and following up with two high-quality solo efforts ('Whatever' and 'I'm With Stupid') - found herself in exactly that position. However evil music execs at the time didn't count on her resilience nor a loyal fan base (including director of the moment P.T. Anderson, who based the script to 1999's Magnolia around nine tracks Mann had written) which set the stage for Aimee to make a triumphant comeback, independent of any record contract.

'Bachelor No. 2' takes up the chance for revenge pretty quickly with 'Nothing Is Good Enough'. You want scathing? How about "Critics at their worst / could never criticise / the way that you do" for starters, or maybe "no there's no-one else I find / to undermine or dash a hope / quite like you". That's gotta hurt.

As usual with Aimee it seems like a hell of a lot of time has gone into constructing the 13 songs here, lyrically and otherwise. Yet at the same time things sweep along effortlessly whether the accompaniment be a single guitar or a full blooded orchestra. Okay, I admit there's no orchestra here but you get the point.

Whilst three of the tracks featured on the Magnolia soundtrack ('Deathly', 'Driving Sideways' and 'You Do') are repeated here, their content is more suited to previous album 'I'm With Stupid' - a record criticised somewhat for it's obsession with some demon former flame - than the rest of 'Bachelor No.2'. Here, for the most part, it's life in general that Mann is concerned with - old friends and escaping High School get special mentions.

After some of the tightly scripted numbers that characterise the majority of the album - a (good) Sheryl Crow-ish opener ('How am I Different'), the Elvis Costello collaboration 'Fall of the World's Own Optimist' and (especially) 'Calling it Quits' - things tend to fade towards the end. A shame but, all in all, if you've any appreciation for Mann's past work, you'll find a lot to like.

* owing to above mentioned record company problems, 'Bachelor No. 2' is difficult to find in the high street. However you can buy it now from Amazon.com for a humble $11 (plus P&P) by clicking right here.