A review of the album 'Just Push Play' 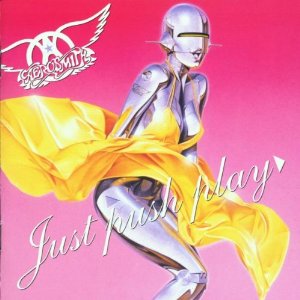 In the video for the song 'Jaded' on this enhanced CD, a beautiful young woman seems discontented despite constantly being entertained by jugglers and clowns. She mopes around, feeling emotionally stifled, until eventually she leaves her entertainers behind, goes off into a forest by herself, and cheers up. Are Aerosmith finally telling us to stop paying attention to the 'entertainment' they and their corporate masters constantly shove down our throats, and to go do something real instead? I hope so.

You see, I despise Aerosmith. Hired by the entertainment industry to provide us with the spectacle of a lifestyle of relentless self-gratification, the quality of their music generally reflects the fact that they know their audience isn't buying the music, they're buying a faint glimpse of a heaven - a place where the chicks are always hot and the beer is always cold and there's no morning after.

Knowing this, the reader might understand my temptation to churn out a caustic rant without bothering to listen to the CD. However, my journalistic ethics held firm and, to my amazement, it turns out that this record is actually quite good! It sounds, bizarrely, like a decent young band with a talent for writing a catchy tune making their first major-label record - polished, singable songs, perhaps lacking a little in originality due to being too heavily influenced by the people they like (Beatles, Chilli Peppers, even Nirvana and Bowie can be heard prominently in here), but with plenty of promise all the same. It has the trademark overblown Aerosmith choruses and lowbrow lyrics, of course, but you could almost forgive those - listening to this, if you didn't know better, you might believe that they might grow out of them.

In short, it's no earth-shaker, but the band really appear to have put the effort in and the result is quite a decent record. That doesn't give you an excuse to buy it, mind.