Does this Director's cut redeem this alleged classic?

Colin Powell, the present US Secretary of State, is the latest US General credited with a war doctrine: in this case only using military force if you have clearly defined objectives, and to use that force overwhelmingly to win the conflict as rapidly as possible. He essentially backs a doctrine precisely the opposite of his military experiences in Vietnam, where US troops were used in a haphazard manner that rapidly descended into the chaos depicted in Apocalypse Now. 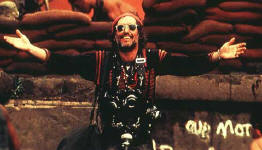 This is a re-released director's cut of the 1979 original, which lengthens it by 53 minutes, and seeing it in the cinema at all, in any form, is an experience.

The cinema shakes with the roar of B52 bombers and missile fire from helicopters, as the contrast between the ?relatively? defenceless Vietnamese and the indiscriminate violence of the US invading forces are repeatedly played out.

In contrast to Platoon, there is much less of a feeling of the jungles of Vietnam stalking the troops, but instead there is a much stronger and overwhelming feeling of soldiers stranded in a nightmare frequently of their own making, and descending into random violence as a way escaping from themselves.

This is clearly stated at the end of the film when Kurtz admits that unless horror is embraced it will overcome you.

There is a tremendous but hardly surprising sense of loss in the film, from the episode where fleeing villagers are blown up and gunned down from the air by Robert Duvall's helicopter gunships, to one of the most haunting images in the film, that of a crashed and abandoned US fighter in the middle of nowhere.

There is an eerie interlude on the Cambodian border, where the crew spend the night with a French colonial family seemingly abandoned in the jungle, living in a gigantic two-storey colonial-era house, and a faded colonial life more suited to the 19th Century.

The fate of the Playboy bunnies flown in to entertain the troops is revealed, and the further up the river the crew travel, the more frequently they ask rampaging US soldiers ?who is your commanding officer?, each time to find they have none, as the breakdown of order becomes more and more complete.

This is a great film for a narrated voiceover, and Captain Willard narrates with a hard-edged haunting melancholy. He rarely participates directly in the violence and throughout the film maintains a terrified blue-eyed serenity that is in complete contrast to the wild yelling of other US soldiers in action. The only other person to consistently maintain such a level of calm is Marlon Brando, who as Kurtz makes his own calmness contrast sharply with his brutal savagery.

Apart from the moral and philosophical edge that enhances the film's timelessness, if there is a practical lesson to be learned (and Powell for one has learned it), it is: don't end in the troops unless you can see the enemy; though after seeing this new release Apocalypse Now anybody in the military would seek a way to stay at home, and avoid utter insanity.