It's 9:45pm but there's still money to be made. "Get your blinkies! Get your blinkies!" The official hawkers shouted. Ten euros a pop. This was the stuff of a Barney or a Bob the Builder concert, only instead of kids, these guys were offloading buckets of rip-off junk to grey heads and greying heads. 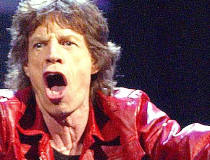 The Rolling Stones is a farce. Corporate rock whores. This generation that started out as self-anointed world-changers and ended up as short-changers of the ideals for a parody. This is colostomy rock. Brian Johnson, singer of support act AC/DC said it well when he said "it's like a fucking runway out here!" during the Aussie group's storming spell on stage earlier. All catwalks and spectacular lighting, The Stones stage is an elaborate creation and their stage crew deserve their full marks for technical proficiency. It's a pity about the main venue itself: all stones and dirttrack: the tickets suggested we'd be inside Oberhausen's sparkling new arena, instead we were in the piece of waste ground out the back.

Brown Sugar was the opening salvo. Jagger's still got attitude, and still does his best to bound and run about the stage. It is funny to see him wiggling about in tight black pants and t-shirts cropped short: the body of an effeminate boy. The old charisma is there for sure but there's no hiding the fact that there's nothing personal here: it's just business. If sometimes feels like the show is being kept together by the undoubtedly tight and talented band that's backing the four Stoners on stage. A full house band and backing singers that's good enough to manage the show by itself certainly makes the job easier for Keith Richards and Ronnie Wood, who more than once miss or jump lead guitar parts during the show. 'You Got Me Rocking' is followed by 'Start Me Up', 'Don't Stop', 'Bitch' and 'Angie'. Wood's playing is shown off by another piece of gadgetry: a camera on the head of his guitar produces some unusual footage for the giant video screen behind the group.

The high point of the night necessitates some help from outside forces, in the form of Angus and Malcolm Young of AC/DC. The former shows what a great gutsy player he is on, an old BB King song. Young storms and struts across the stage, playing off Keith 'Rock Me Baby' Richards and squeezing the song for more than Mick 'get-it-done' Jagger's prepared for.

'Tumbling Dice' dispatched, it's time for an over-lengthy introduction of the personnel. Just like their constant costume changing and loud colours, there's a lot of circus kitsch about Jagger. His exhortations and information nuggets to the crowd auf Deutsch are stilted and business-like but far better leave him on stage than allow Keith Richards play two of his recent compositions, the appallingly trite 'Thru And Thru' and 'Before They Make Me Run'. The state of the lyrics here suggest something from the copybook of a Blues for Beginners evening student.

With a rousing 'Sympathy For The Devil' done, it's time to move onto the smaller stage down at the end of the U-shaped catwalk the band uses so little. Three songs, 'It's Only Rock'n Roll', 'Like A Rolling Stone' and 'Midnight Rambler' are played to the minority of the crowd down there who can see something before it's back to the main stage for four more songs to wrap up.

By the time we're into arguably the two best songs of the night -'Street Fighting Man' and 'Satisfaction' - much of the crowd has already poured out onto Oberhausen's streets. They're not used to being out so late and they barely notice the elaborate fireworks display which marks the end of the set.

A greatest hits package for sure, this show was perfectly packaged for the corporate tripper looking for a bit of nostalgia and boogie-ripping away from the grind of the office. Nothing new, nothing ventured, nothing. Five before midnight and two bows done, they rattle off stage looking just like the pantomime dames they were when crawling on two hours earlier.