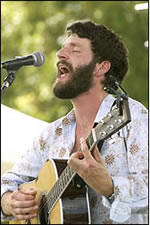 Review Snapshot:
Ray LaMontagne's music communicates to you on a different level to most and to be witness to his craft in the live arena is a soul-hitting experience... even if it be a commercial festival run by a corporation, he adds a very human touch.

Full review:
The timings are precise and clinical at Wireless; the acts come on and leave as listed, in fact it's all a lot more conservative and organised than festivals should be, the drink tents are closed by eleven and the drunks are strangely a minority group in Hyde Park on this Thursday the 22nd of June, 2006.

But none of that matters when Ray LaMontagne comes on. In a blue shirt, untucked, blue jeans, a wild beard and accompanied by his talented ensemble of musicians he ambles up to the mic, whispers a count-in and then launches into a track not featured on Trouble, which is nonetheless it's captivating, with him blowing away on his harmonica and crooning out vocals over the top.

The crowd are completely appreciative and he's pulled quite a number of people into the XFM tent for his performance, for 'Hold You In My Arms' and 'Shelter' there's a chorus of crowd-members singing every word, a hum under the resounding timbres of his luscious, luscious voice.

He stands in front of his audience looking slightly shyly at them and quietly introduces his band members, who all receive rapturous applause, then starts 'Trouble' and his quiet, retiring voice suddenly beams in a loud and triumphant exuberance that encapsulates everyone and sends shivers down their spines and makes pimples prick up on their skin. This man they behold is the truest troubadour of our generation and will outlast all others as his music's an absolutely timeless documentation of what it is to be human and to paint yourself a life from the vivid palette of emotion that's available.

Ray LaMontagne offers a maturity in his songwriting that sounds as if it's based on a wealth of experience and heartbreak and knowledge, there's contentment and there's unrest and there's everything that's human, and it makes his presence truly ever-lasting.

The finisher is the wonderful 'Jolene', with its beautiful stanzas of verse and mesmerising musical prowess. All left on stage is Ray and his bassist, but below that stage he has a whole group of people pulling at their heartstrings in singing along with the most sensational solo artist this side of the millennium? Superb.