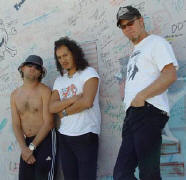 It takes Metallica to close a rock festival. Out on the road for many days and nights this summer, they're hot-wired and feeling all right for it on this northern German night. Kirk Hammet's grown his hair long, Lars Ulrich has lost most of his and James Hetfield's going back to the band′s roots too judging by the frontman's physical appearance. New boy, former Suicidal Tendencies bassist Robert Trujillo looks annoyingly like the odd-one-out tonight, in a bodega boy's Bermudas and basketball shirt next to the other members′ tight, slick blackness.

It's all about the hits tonight. With its barreling momentum and great, biting guitars Metallica quickly demonstrated why it more than any other group has guided the fate of hard rock for twenty years. The first power chords and drum barrages of this two hour set obliterates the other bands on the bill. Queens of the Stone Age and Audioslave are quickly forgotten in the full-house euphoria that's built up to welcome San Francisco's most durable hard rockers. 'Blackened' cuts through the late-night chill and 'No Remorse' takes no prisoners before the setlist jumps sidesteps across the band's early-days canon with 'Harvester Of Sorrow' and a blistering, dirgeful 'Welcome Home (Sanitarium)'.

Metallica is supposedly rejuvenated these days. Personally I liked much of what the band was about over the past decade. Purists differ. I liked it when Metallica's high-speed thrash was slowed down on the "Metallica" album and the group tried to move closer to mainstream rock, multiplying its sales of course in the process. It's no coincidence that much of the material tonight is from the group's many-million selling 1991 album "Metallica." This is Metallica at its most potent: hard and heavy but also melodic, and without the unconvinced (and unconvincing) soft-rock pretensions of the worst of the "Load" and "Re-Load" albums.

In fact everything tonight comes from before 1992 with only two tracks from the new album, "St. Anger" : the title song and 'Frantic'. 'For Whom The Bell Tolls' and 'The Thing That Should Not Be' are much more recognisable - and better - slices of Metallica's output. The new material is angry, yes, but the anger is pointed nowhere - unlike earlier days where James Hetfield approached death, war and terror in his songs from the viewpoint of the sufferer. There he's inside the songs. Here, on the new songs, the anger might be there, but it's an anger seeking a catharsis that's unfortunately lost in walls of guitars and annoyingly tinny drumming.

The fireworks are there just as always, piercing the cold wetness of the night. Interestingly, the video screens often avoided the faces of the musicians for their hands, focusing on the creation of the music rather than the creators - a trend in several larger rock tour outfits this year (e.g. Bruce Springsteen). There was much to focus on during this fastly paced show. James Hetfield and Kirk Hammett's tandem guitars hooking up tightly, Hetfield strumming fast chords and Hammett's leads twisting and wailing before the music's shifted onwards by Lars Ulrich's precise and characteristically break-neck double bass drums. Guitars were strummed to match every drumstroke: this is indeed one "mother f**king loud" and tight outfit - to steal a regular Hetfieldism.

A barrage of golden oldies gets fired off the stage in a blitzkrieg finale to a seventeen song set. One paves the way for 'Battery' before we're dragged backwards into Hetfield's wicked world for 'Master Of Puppets'. We're allowed to surface again briefly for air with 'Nothing Else Matters' and then there's no mercy until the lights go down: 'Creeping Death', 'Sad But True' and the old gold of 'Enter Sandman' before Ullrich comes out from behind his drumkit for the last time. The band comes to the front of the stage to work the crowd. Throwing guitar picks and drum sticks to the fans, Hetfield and Ullrich are the most vocal in thanking their German audience for support past and present. Even past a well-taken Hetfield send-up of German-accented English, it's easy to feel the sincerity of the band's appreciation for one of its most loyal fanbases. The love is returned and after a promise to be back in the autumn, the four exit stage left to 70,000 cheering "sehr gut!" and "wonderbar!" With a package of vintage old and a little new, Metallica proved tonight they can easily hold off the "nu metal" creations of Limp Bizkit and any loud rubbish Skipknot's offering. All the younger pretenders owe them something, but few will ever come near the durable catalogue what Metallica has achieved in a two-decade career.

Only question lurking in the back of my mind: where now for this great group? We relived all the glory of the past tonight but there was little sense of the band's future, and what we did see of the road ahead didn't match that which we've travelled so far.