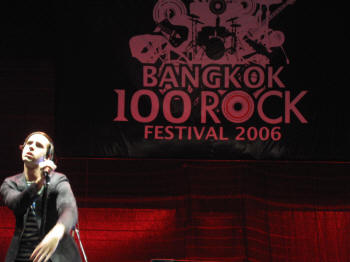 Review Snapshot:
Maximo Park play their last show before hitting the studio to work on their next album. Vintage high-octane Paul Smith, sweating in the Bangkok sun and another gig confirming what many have come to think of this band: a bunch of nice lads in the breakout years before they make it massive.

Full review:
If Bangkok 100 festival organizers were giving a prize for being nice guys Maximo Park would have won it. Well, they'd have won other prizes too. Arguably the best set of the festival (Futureheads and Franz Ferdinand are in contention too) and lots of bowing and thanking in between songs won these ordinary boys a lot of fans in Siam.

Crowd control - well turned out in short sleeved suits traditional to this land, the Thais proved maybe too nice to be security guards - was put under pressure for the band's debut single 'Signal And Sign' but things cooled with Smith's goofy tales of touristy things offstage, more hints that this is a bunch of ordinary lads chuffed to have the chance to play in front of 50,000 on a hot Bangkok night. And by golly they were going to give ticket holders value for money for the privilege. Great clanging guitars went full throttle on Going Missing, slabs of synthesizer lobbed in for extra effect.

"I always said you were a liar and a hypocrite," sings band leader Paul Smith tonight. Not autobiographical, Paul, surely? Smith's self-deprecation went down well among Asians, who prize modesty. "I've been a disappointment all my life?" he tells them between bouts of shimmying and sky-high scissor kicks that got the audience sweating for the recognisable and rocking 'Apply Some Pressure'. Then six minutes before the red lights flashed he decides to "rip through some songs for you!" Keeping up the nice guys routine, a slice of indie romance Kiss You Better gets dished up "for the ladies in the audience."

"This is the last show before recording our new album," Smith informed the crowd. So it was special, he told them, and damn, you believe him, especially given how hard he worked tonight. Kept for the encore, one of the songs going on that new album, A Fortnight's Time, is "not necessarily about being a cheesy person?" says Smith in one of his typical bubbling into-it introductions. 'Nout cheesy 'bout it: the song is Smiths-smart. One of the best choruses of the night, Maximo Park's lead man suggests "Regret it, regret it, regret it, And even though I led you on, Forget it, forget it, forget it?" After a show as good as this no one's doing neither.