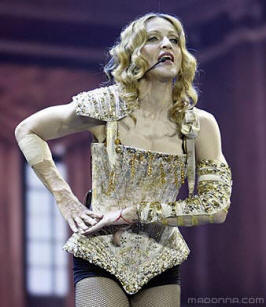 Review Snapshot:
Jules Jackson watches in awe as the Queen of Pop tells the rain not to drop and it obeys her command.

Full review:
Huey Lewis once remarked that the power of love is a curious thing. It certainly is in our house because, in the last year, it has convinced me to journey to Belfast for 70s rock dinosaurs Fleetwood Mac, to Vicar Street for 80s power balladeers Heart and, on the 29th of August 2004, to Slane for Madonna. Now, I know next to nothing about the Detroit Diva, even less about 80s pop and damn all about gay disco but the Missus worships Madge. So, as soon as she informed me breathlessly that her icon was finally coming to Ireland, I was sure that there was going to be no escape from the black hole of Slane.

There I sat bleary eyed, early on the morning that tickets went on sale, sipping from a mug of black coffee and hitting the refresh button on my laptop until I was finally admitted to the relevant section of the Ticketmaster website whereupon I duly punched in my credit card details and printed off my sale confirmation. Then I rang the Missus to tell her to stop worrying about missing out on the gig.

Fast-forward to the day of the gig, where life began to imitate art when the four Scottish lesbians in front of us in the queue started kissing each other in the rain. "Wow", I thought, "This is the MTV Video Music Awards come to life!" As we shuffled towards the entrance, tickets clutched in hand, I couldn't help but notice that, apart from a few perplexed beasts of burden like myself, the audience seemed to consist almost entirely of big boned girls in lurid, plastic Stetsons and slim, tanned young men wearing cowboy shirts and calling each other Doris. Even though the Missus had given me a crash course in Madonna by playing 'The Immaculate Collection' all the way down from Dublin in the car, on the basis that I would enjoy the gig more if I could recognise and sing along with the songs, I still felt as out of place as Michael Moore at the Republican Convention.

After the Missus was fed, watered and suitably attired it was time for us to pick a vantage point for the impending spectacle. We settled ourselves into a good position to the right of the sound desk just as Iggy & The Stooges were finishing off a set that was blunt, basic and utterly lacking in refinement. Personally, I thought that Iggy rocked but the general reaction of the crowd was as if it had collectively found itself stuck in an elevator with a man who couldn't stop breaking wind. I can't actually work out why Iggy was on the bill anyway, apart from the fact that Madonna and him both come from Detroit and have a shared passion for the phrase, "M*th*rf*ck*r!"

The next few hours passed uneventfully, apart from some heavy rain and an unexpected second performance from Paul Oakenfold. He had opened the festivities earlier in the day and was now required back on stage to distract the attention of the fans from a team of roadies who were feverishly drying the stage floor by hand with an seemingly endless succession of white towels. Finally, just after 9pm, a series of giant video screens swung into position and a show that I can only describe as the greatest I have ever witnessed in my entire life, began in earnest.

There are perhaps only ten artists in the history of American popular music who truly deserve the epithet of genius. They are in no particular order: Elvis Presley, Frank Sinatra, Prince, Bob Dylan, James Brown, Ray Charles, Miles Davis, Bruce Springsteen, Jerry Lee Lewis and Madonna. Madonna, in my book, leaves the rest of them for dust. The spectacle that she produced was as far ahead of the traditional music gig in terms of style and artistry as the Sistine Chapel is from a primitive cave painting. It was Hollywood, Bollywood, Broadway, Roman Catholic Mass, Restoration Ball, Disco, Royal Pageant, Magical Ceremony, Rembrandt Painting, Anti War March, Circus, Drill Parade and Pop Video all rolled into one. Watching it was akin to seeing a Kuwaiti oil well explode into billowing clouds of fire. I wish I could pick out one single moment that was my favourite but the whole damn thing was, from beginning to end, a highlight.

Some artists, like Michelangelo, seem to be touched with divine fire. Madonna has that quality. When, during 'Don't Tell Me' it looked like the heavens were going to unleash another stage drenching shower of rain, she pointed at the sky and asked the rain not to drop again that night. Amazingly, it obeyed her. Not even Bono can pull that trick. Another quality she displayed was her total commitment as a performer to the audience. She was, in the words of her own song, truly crazy for us. I really got the feeling that she gave her all to the show even if it damaged her health or killed her outright. For example, at the end of one dance routine she breathlessly remarked that she wasn't spinning around because it was part of the choreography, she was simply doing it to get warm. Forget her half a billion-dollar fortune, forget her diva like status, Madge was up there freezing her pointy breasts off just for us. But what surprised me the most about Madge was her booming husky voice, her gigantic presence and her leonine sexuality. She paced that stage, growling at her audience, like an un-caged lioness in heat. I had never really thought of Madonna, with her gymnast's body and squeaky singing voice, as sexy before. The only female pop star from my teenage years that impinged herself on my nocturnal fantasies was the Latino stunner Sabrina and I still think her video for 'Boys, Boys, Boys' is a masterwork of one handed television. So, I was not prepared for the almost limitless reach of Madonna's aura. She seemed to shrink the entire field to the size of a small, sweaty nightclub and her lusty charisma brushed up against me like a young woman in a cocktail dress squeezing past on a crowded dance floor. That is true stardom.

The concert ended with a display of fireworks that couldn't match the sparkle of Madonna's own performance and, by their fairground light, we tramped slowly back up the hill to the red exit. As we waded through the debris of plastic beer holders and burst inflatable chairs, the public address system crackled into life and the voice of a concert official remarked, "Well, that was worth the wait, wasn't it?". Yes it certainly was, regardless of whether you had waited a few months, like me, or twenty years, like the Missus.