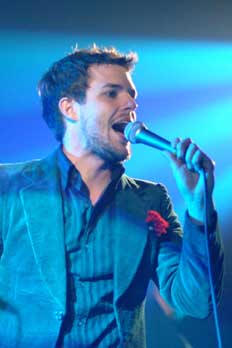 Review Snapshot:
Las Vegas, made-up lovelies, Bravery haters, platinum selling album about a gay murder plot, loved by Ireland and Lifestyle sports. The Killers came to a scorching venue near you. Were you there?

Full review:
Last year, I wandered into a tent to find a band from Vegas singing that Mr. Brightside song I really liked, from that album I bought but hadn't really listened to. A few thousand people egged them on. Hey, they sound pretty good, and that singer even if he does look a bit plastic fantastic is kind of cute. Hmm. Fast forward a smidge. Around 50,000 are standing in front of a stage grasping each others fists, climbing up shoulders, dodging and throwing plastic pint glasses and yelling their lungs inside out, "how did it end up like this / it was only a kiss / IT WAS ONLY A KISS." And how did it end up like this, transformed from emo throwbacks into Chanel shade-wearing, sculpted hair and tartan jacket sporting kings of indie rock and roll?

The new marketing in indie - word of mouth, bootlegging, tipping pointers - have launched The Killers into a stratosphere previously reserved for guys who have been around for years. But here they are, drawing the biggest crowd, and they're not even headlining the bloody thing. Was it indifference or pure nerves that conditioned their frozen stature on stage? Flowers hid for the most part behind his stacked synths, not showing one ounce of emotion on his waxy eye-linered visage. The drummer was the only one who gave it loads, occasionally rising from his stool to prove an invisible but animated point.

Tragically for The Killers, the sound was so bad, the gig itself was highly disappointing. Most of the crowd were well behind the pit and had to endure a muffled underwater amp system that shred any subtly The Killers were willing to dare. Flowers was more than occasionally completely off-key, perhaps indicating that he had as much problem with the sound set up as the punters did, the guitar amp was completely shredded coming to life only for Mr Brightside, the drummer was out of time now and then and the bass amp was far too loud, although, considering that's where most of their hooks lie, it's not a bad thing really. All of this isn't very professional for a band asked to headline Glastonbury, but maybe that's why they turned it down.

Smile Like You Mean It was more or less spot on, prompting the first of a million sing-a-longs. Jenny Was A Friend Of Mine, despite the sound gremlins, shone through as the preposterously great pop song it is, as did Somebody Told Me, although the over zealous tempo smudged the result on the latter. But what everyone really wanted to hear was All These Things That I've Done, so much so, that most people chose to ignore what song was actually coming next in place of singing along to 2005's all purpose mantra "I've got soul but I'm not a soldier." It was anthemic, and pitched The Killers' flag firmly in Oxegen's soil for years to come. But one left feeling, more relieved than exhilarated. They hung on, barely. Now, let's see what else they can do.

Check out the res of CLUAS.com's coverage of Oxegen 2005