Gareth hooks up with the Chiefs' drummer Nick Hodgson... 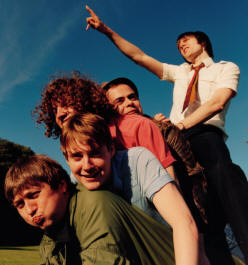 Leeds revellers The Kaiser Chiefs have gone from playing in dingy clubs in their hometown to the NME Brats Tour across the U.K. to the distinguished American SXSW Festival in a matter of months. With their debut album doing really well and many festival dates already lined up, they are certainly a band in demand. Gareth Maher caught up with drummer and chief songwriter Nick Hodgson for a quick interview.

Taking their name from a South African football team (Kaiser Chiefs is the former club of Leeds United stalwart Lucas Radebe) the band is enjoying their current success but has not forgotten where it all started. In fact the band owe a debt of gratitude to The Ordinary Boys who introduced them to many record company executives. This comradeship has been growing stronger with U.K. bands as Franz Ferdinand helped Bloc Party get their deal and The Libertines helped Razorlight find their feet. It's like one big indie rock family that keeps producing fresh, new and exciting (supposedly) offspring. But the Kaiser Chiefs want to be more than a one album wonder.

Do the band fear that this is a bad time to launch themselves with so many acts gunning for the same spotlight?
It's like shoe shops, yeah? They are all situated next to each other and that is because it gives you more choice of the same thing. There are a lot of young lively bands around at the moment and that can only be a good thing.

And what about rivalry?
I would call it friendly rivalry, as we are always second to their first with us wanting to be first. But we're friends with a lot of the bands.

The debut album is entitled 'Employment'. So was this a cheeky statement of the new career you want to pursue?
Yeah, one of us used to work in a factory, one worked in a pub, and I was a DJ, just normal jobs really. So we all packed it in when we got signed last August to do what we've always wanted to do.

The band are being pegged throughout the media as the new wave of Britpop, how do the band feel about that?
Don't know really. We all met at 60s/Britpop clubs and love the music from that era. There are elements of Blur in our sound but we're not the new Blur.

Didn't you play with ex-Blur guitarist Graham Coxon recently?
Yeah. He's actually on the record. Well his motorbike anyway. If you listen to the opening of 'Saturday Night' you can hear him revving the bike. He knew our producer Stephen Street and it was all a bit of fun really.

In songs like 'I Predict A Riot', there is an overwhelming sense of social commentary in the lyrics. Did you set out to exploit the scenes that you witness everyday in your hometown?
Well it all just came out in the lyrics really. I used to DJ at this indie club in Leeds and would have to drive past this horrible mainstream club where everybody was pissed and police vans were packing people in. So in that case we are using social commentary but then again we're not.

Playing as part of The NME Brats Tour, you must be come into contact with a lot of different bands?
Yeah we've been listening to and enjoying the performances of great bands like Bloc Party, Futureheads, The Killers and this new band called The Cribs. Actually there's this new band from Leeds called Duels who you should take note of. We actually met up with all those bands again at the SXSW Festival.

What can people expect from your live performances?
Expect the spontaneous. We love playing live and are looking forward to playing the summer festivals. Hopefully people will have bought the album and will sing the songs back to us.