A review of the album 'The Very Best Of' 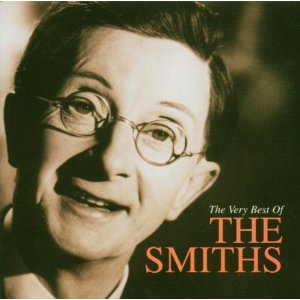 Most people probably have their minds made up about The Smiths already, so I suppose any review isn't really going to win them any new converts, except maybe amongst those of us too young to remember the eighties. But if that's you then you're too young to be buying records anyway, either that or I'm starting to get old.

The Smiths were formed in Manchester just as Margaret Thatcher's reign as Prime Minister was getting into full swing. Thatcher's Britain (and Manchester in particular) with its 3,000,000 unemployed, its miners strikes, its poll-tax riots and its slagheaps was perfect fodder for the lyrics of that connoisseur of ennui Stephen Patrick Morrissey. Morrissey was an unusual sort of frontman, championing misery and languor over the get up and go!! yuppie attitude of the 80s. Through songs like "Heaven Knows I'm Miserable Now", and "Shoplifters of the World Unite", he became a totem for pasty-faced youths, desperate to escape to......wherever.

Rather than adopt the heavy, oppressive sound of their fellow Mancunians and most obvious influence, Joy Division, The Smiths took a sugared pill approach when it came to their tunes. The cloaked their bleak lyrics in Johnny Marr's melodic chord progressions and a classic verse-chorus-verse pop format. While this could be seen as an affront to what The Smiths meant to their fans, it really just increased their subversive nature. Before The Smiths, no chart single had questioned the pointlessness of existence. "What Difference Does It Make" changed that. God knows how many kids heard The Smiths on Top of the Pops and were inspired to look for something a bit more meaningful in music than Wham! or Big Fun. The Smiths were a Trojan horse for misery in music.

At 23 songs long, this collection is fairly comprehensive and contains nearly all of the classics, even if "Frankly, Mr. Shankly" is inexplicably absent. Still, you can't shake the feeling that Warner Brothers are just milking this cash cow for all it's worth, by making the back catalogue artificially rare and then releasing this, just as 4AD did with The Pixies a few years ago. You can't fault the material for that though, and this collection does provide a snapshot of an age when bands actually had something to say, instead of just raging against nothing like Papa Roach and Limp Bizkit are doing now. Maybe that's just me getting old again, but hopefully I can age as well as this collection of songs. Some lights never go out.