A review of his album 'Want Two' 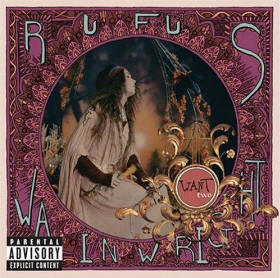 Review Snapshot:
Another wonderfully confident and ambitious blend of sex, mysticism and well-cut outfits from the Oscar Wilde of pop.

Full review:
In a world of stale singer-songers and assembly-line guitar bands distinguishable only by the date on their NME front cover, thank Christ for Rufus Wainwright. Your Sunday supplement wraps words like 'flamboyant' and 'extravagant' around sultry photos of him lounging in velvet blazers and foppish fringes; your daily music journalist reports his uninhibited and utterly quotable thoughts on his music, his sexuality and his unwavering self-belief.

Even better, almost too good to be true, his records don't just live up to this image - they embody it. Sometimes wilfully bizarre, other times wildly overambitious, Want Two, following on from his predecessor and companion piece Want One' may not be as immediately accessible as his brilliant 2002 album Poses but is certainly a marvellous record that will undoubtedly delight and infuriate people in equal numbers.

Apart from Spinal Tap sleeves, rarely has an album cover so accurately represented its contents. A detail from one of Turner's typically vivid orange canvasses, Wainwright himself in drag as Ophelia and the Lady of Shallot, sexually explicit lyrics in baroque typeset - it all captures the intoxicating cocktail of Wildean decadence, Romantic self-awareness and pre-Raphaelite langour you just don't get from, say, the latest Snow Patrol single.

Add in the musical references to Ravel's 'Bolero', Catholic hymns and French cabaret and you soon realise that Wainwright is making dark, sensual and dramatic music of the like not seen since Suede's Dog Man Star, itself the most daring and ambitious British record of the '90s.

Want Two aims for the stars and is unashamedly music as art. Because of it, strong melodies, well-crafted lyrics and daring experimentation will thankfully return to become as fashionable as Wainright's tailoring.

Opening a record with six minutes of 'Agnes Dei', however, would be too much even for a Pope to bear. From the second track, though, we can settle in and enjoy a melange of Figure 8 era Elliot Smith (the piano-led 'The One You Love'), Parisian torch-songs ('Coeur de Parisienne') and gentle, heartfelt ballads ('Little Sister', about his sister Martha). jazz, baroque, waltz - all seamlessly stitched into a lush, shimmering fabric and cut to fit perfectly with Wainwright's voice, a rich blend of Ron Sexsmith, Evan Dando and Turkish coffee.

Much better and more rewarding is the warm, sincere 'Memphis Skyline' in memory of Jeff Buckley. Admitting that at first he 'hated him for the way he looked', Wainwright tells of how his opinion changed on hearing 'Hallelujah sounding like mad Ophelia'. It's a lovely song, all the more welcome for reminding us of the better aspects of Buckley's own work - the similarly dramatic flourishes and experimentation - and hopefully in the process rescuing Buckley's legacy from the overwrought indie-shrieking of his imitators.

Wainwright, like Buckley, began under the shadow of a famous family name, but there's no doubt now that he has emerged as a rare and wondrous talent in his own right. Such height of ambition and breadth of scope may sometimes involve over-indulgence, but we should forgive Wainwright for his occasional lapses and instead take pleasure in a body of work that will endure for years. The man is an undoubted star.