A review of her album 'Begin to Hope' 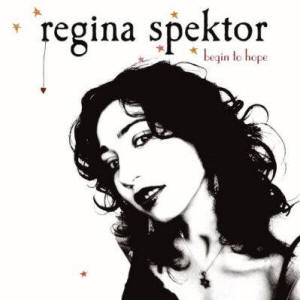 Review Snapshot:
Anti-Folk scene queen of New York offers up a mixed bag of hope with her major-label debut.

Full Review:
On the back of her well received 'Mary Ann Meets the Gravediggers' album, comes 'Begin to Hope' the latest offering from Regina Spektor, her first for a major label. The title suggests that with big label backing and presumably a larger budget, Spektor will cross over to the mainstream or perhaps, depart ways with the underground obscure chic she formed her Soviet Kitsch upon. Of course there is no great crime in wishing to bring your music to a wider audience, but does crossing over to drip-fed, apathetic radio-listeners necessitate losing your individual style?

Spektor's career to-date has been one of brave and bold movements - a lesson in how to carve your own sound and build upon your own identity. Her songs have always been imbued with a true story-teller's strength and a wealth of characters. Stripped down, bare-boned piano and a cappella renditions of her childhood in the Bronx and her Russian heritage, saw her develop a loyal fan-base, in love with her eccentricity and nerve to furrow her own path.

With 'Mary Anne' Regina built upon her growing reputation, show-casing her lyrical ability and her wit and talent for wry observation. This new album was her foot-in-the-door opportunity to establish herself as an artist that could not be diluted by commercial success.

It is possibly too great an aspiration to fulfil, and disappointingly Regina falls far short of the mark. The album begins with 'Fidelity' delivering tame vocals, dumbed-down lyrics and a seriously middle of the road melody. 'Better' places Spektor with a full band (with guest guitarist Nick Valensi) and a radio-friendly chorus, complete with delay effect that Coldplay would cream themselves for. It isn't entirely implausible that an artist like this might hang up her eccentric boots for the quiet life, but it's hard to fathom.

'Samson' (a re-worked song from an older recording) shows signs of the old Regina's song writing abilities, but only just. 'On the Radio' is an unremarkable pop song that reminds me of the woeful "I'm a big big girl in a big big world" tune that insulted the airwaves some years back.

'Field Below' is a better effort with some nicely blended gospel/blues backing vocals and her classically trained piano roots daring to shine through. Although there is a touch of Art Garfunkel's 'Bridge over Troubled Water' about it that seems to seek out mass appeal.

A light, electro-pop 'Hotel Song' is less Chicks on Speed, more Chicks on Dope. The backing band is tepid and inoffensive and I can't imagine her heart is in this commercial drive when lyrics like "Little bags of coke" sit next too lyrics like "I have dreams of Orca whales."

It's at this point that Regina appears to have remembered herself, thought 'shag this for a game of darts, let's get back to business', as the album takes a dark twist. 'Apres Moi' is a silent movie piano intro that would have brought tears to Charlie Chaplin's blackened eye. "Be afraid of the lame/they'll inherit your legs" sung in a husky Muscovite brogue, is a welcome return to form. Its apocalyptic ending is a Dr. Zhivago wet dream. Similarly, '20 Years of Snow' with its twisting arpeggios, is all choppy tempo changes and acidic lyrics.

'That Time' and 'Edit' are cheap forays into electro that are way too half-arsed to be taken seriously. The songs are too drawn out and Regina strays into near teen-angst a la Avril Lavine, proving herself the 'Walter Mitty' of music. She flips into another genre, again, for 'Lady' and album closer 'Summer in the City.'

Overall, 'Begin to Hope' is a lukewarm album from a one-time bright spark. One hopes that Regina finds her confidence enough to stop the powers that be from watering down the qualities that make her so unique.