This article was first published on CLUAS in Jan 2005

An Interview with The Trashcan Sinatras

Brian links up with guitarist John Douglas as he prepares for an Irish tour... 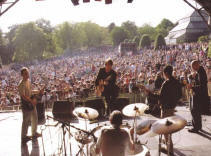 Having released three fine albums in the first half of the nineties, their record company imploded, leaving them bankrupt. Where most bands would have called it a day, they stuck to their guns touring intermittently, releasing singles under aliases or in far flung places like Japan, and after eight years, returning with a new album 'Weightlifting'. Brian Farrelly puts the questions to guitarist John Douglas who waxes lyrical about their lost years and Cluas favourite, Declan O'Rourke.

Cluas: First up, can you give us a brief synopsis of your bankruptcy and your decision to solider on in such trying circumstances?

John Douglas: In 1997, a dark cloud appeared over Kilmarnock, it banished the sun and a seemingly endless winter descended upon us ... six years it stayed, 'the indoors years' as we now call them. Unconfirmed reports of vulture sightings in the Ayrshire skies, it were dark times in the 'Shire.

We Trashcans clung to our 24 Track Angela mixing desk as the winds howled outside our beloved Shabby Road studios. In the year 1999 the roof and walls eventually gave in to the elements and our nest was no more...us Trashcans were scattered to the winds, we wandered the wilderness alone. In time, the cloud lifted and we spotted each other off in the distance, a great celebration was had and in 2003 we swaggered into Riverside Studios, in the city of Glasgow, armed to the teeth. We soldier on it seems; clouds, vultures, storms and disaster, somehow, we laugh in their face. 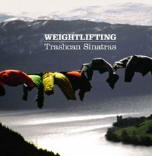 Given your limited opportunities to gig over the intervening 8 years since the release of 'A Happy Pocket', how did you finance and release 'Weightlifting'?

We indulged in the age old crime of bootlegging; we forged ourselves, made a mint, well, maybe not a mint but plenty to help the crusade. The Knights of the Grand Scottish Arts Council pledged their troth to our cause and, afore ye knew it, there was enough to make the record.

As you so rightly point out, gigging was out of the question, the blaggards from Her Majesty's Tax Dept. would have had us keelhauled so the cash we raised from ye olde website, selling our Demos/Cover Versions/Live stuff CDs ,"Zebra of the Family" and "On A B-Road", was our only road out of ruin.

You went to the SXSW festival last year (and I believe are attending again this year). Did you find this helpful in terms of getting the album out there?

In Texas we hunted down a Record Company called SpinArt. We trailed them all the way to New York and it was there that they finally succumbed to our many charms. Texas was crawling with record business folks, Their Tequila was strong, burritos hot and smiles a mile wide. If you are a hungry group set on bagging yourself a big, fat Record Company then Texas in the early spring is a damn fine hunting ground.

Did you find yourselves continually re-working songs for 'Weightlifting' or are they all relatively new? Specifically, there is a vastly different version of Weightlifting on you rarities album 'Zebra of The Family' to the one that appears on the latest album?

The songs that appear on "Weightlifting" were written over the last seven years, other songs were written in this time, but the best reflection of our current moods are the 12 songs that make up the record. We wanted to make a balanced record and I think we are victorious.

The song you refer to that appears on our Zebra album is a lovely recording we made in the last months of Shabby Road. We tried to bring the song to life onstage but the gods were against us and the song remains a studio bound prisoner. The line, " you will find a great weight lifting" managed to escape and build itself a new life. It seems to be doing very well in its new home, the title track to our album, "Weightlifting".

Andy Chase (Ivy) mixed 'Weightlifting'. What do you feel he brought to the record?

He brought a fresh ear to the table... he brought years of experience at the mixing desk?he brought clarity and perspective ... the record would have been a very different beast without him. He also brought New York to the table. We started the journey of this record in the bedsits and flats of a freezing Kilmarnock, in relative poverty and severe low spirits? landlords hounding us ... time was spent mastering the subtle art of debt-juggling.

We finished the journey staying at the Chelsea Hotel in New York City, toasting our good fortune and perseverance with the finest Malts, spending our New York days listening to Mr. Chase putting the icing on the cake. I have nothing but golden memories of those days.

Who has inspired you musically during the making of Weightlifting and who is the last act you got excited about?

I am a massive fan of your countryman, Declan O' Rourke, I met him a few years ago and received a few CD's of his acoustic recordings, such a fantastic songwriter... his song "Sarah" is just breathtaking. He has been over here in Glasgow playing over the past few years and I raved madly at all my friends to go and check him out, every one of them has fallen for his charms. The boy has it all... beautiful, sprawling melodies, wisdom in his lyrics, a real rich croon of a voice and he is handy on the old guitar too. But mostly it's his songs...big, undeniable, Giant Redwood songs.

All of your music is lyrically innovative and quite literate - are their certain authors who impact the lyrics?

My main touchstones on the printed page are the poets.... Robert Burns and Dylan Thomas ... though in my life so far I have enjoyed the works of Raymond Chandler, James Kelman, Mary Shelley, Flann O Brian, Lewis Carroll, and recently I've really enjoyed The Life of Pi, A Cure For Gravity-Joe Jackson's memories of growing up and Art Spiegelman's Maus, an amazing graphic novel. I am unsure how and if any of these dudes have any impact on the lyrics, but they all have a voracious appetite for language and the communication of emotion as well as plain, old-fashioned storytelling, in all of which I humbly share.

In the past, various band members have sung on tracks. What is your songwriting process, do you all write?

Yes, we all write, we all sing, we all play guitar - makes you sick, eh? The song writing is a many faced affair; arguments ensue, huffs are taken, it all blows over. Among the debris lie songs - songs strong enough, to our ears, to make the whole debacle worthwhile.

Over the last few years you have only toured sporadically. Is it good to be back on the road in a serious way and how did you enjoy your recent sojourn in America?

Yes, we spent the early autumn of 2004 on a five week adventure across North America. We learned how to play again, we acclimatised to each other, back on our collective feet again. We drove the length and breadth of the place in our wee van, Atlantic to Pacific, gazing on desert and mountain range, tumbleweed towns and endless skyscrapers. It was election fever and wartime, flags on every corner, grief and paranoia, real mixed feelings; general confusion about how they were being viewed by the outside world. I am glad we were able to distract and please the good folks who showed up at our shows to whoop and holler. All of our shows were great nights. We were very busy boys; lots of radio sessions, in-store appearances, etc. If you are in a band then it really is the homeland, great, educated audiences. They know a player when they see one. Very untouched by fashion or coolness, plenty of amazing venues, always well run and the scenery is just astounding. Go west, young man... the grail lies there.

What's next for TCS? Has the self financing of 'Weightlifting' proved a wise decision and can we expect a less painful wait for the next album?

A whole new year looms ahead. We have the early part planned, touring the U.K. for the first time in around 8 years. I wonder how the land has changed ... are the motorway services still the glamourous havens they once were?  We will also be over in Ireland, Galway, Cork, Limerick and Dublin. My mother's side of the family are from Connemara so, hopefully, I will get a chance to meet up with some o my ain folk.

The self financing of our record has been a great decision, though we had no choice at the time. We feel much better about the whole thing now that we have no one to answer to except ourselves. Hopefully, the journey towards the next record will be equally eventful, but less traumatic.

For readers interested in the process of mixing an album, there is a rather excellent diary on the Trashcan Sinatras website of their experiences mixing 'Weightlifting' with Andy Chase.