This article was first published on CLUAS in July 2002

A Conversation with Goodtime John

Robert links up with Goodtime John recently to discuss... 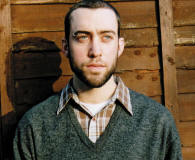 ...his new album 'Brought Four Ways out of Town', the genius of Vincent Gallo, and making a disgrace of himself onstage.

What's the story with the name, Goodtime John?

It's just my nickname, really - it just kind of stuck. I don't really consider myself a singer/songwriter or whatever and thought it just said a bit more. I consider it to be a band more than just me and we have nicknames for everybody in the band.

What aspects of the singer songwriter genre are you trying to avoid?

(Pause) I don't know, I don't really listen to a lot of singer/songwriters and I hate to be pigeon holed - well I guess everybody does. When I hear somebody is a singer/songwriter it kinda puts me off. I just think it kinda cuts it short, like that's all they are, somebody with a guitar and plus I think all the people I play with bring an awful lot more to it and what they do make it 100 times better.

How did the collaboration with members of the bands The Redneck Manifesto and Connect Four Orchestra come about?

Well I jammed with two of the lads from the Connect Four before and we all hang out together. I do something different to what both those two bands do but at the same time there's a common thing between us just through what we listen to, we all go to the same gigs and grab inspiration from the same things.

What other Dublin bands do you admire?

The Dudley Corporation, Joan of Arse and The Jimmy Cake I think are very good - they're all friends and we all go to each others' gigs.

Recently Gemma Hayes commented on the scene in Dublin surrounding the Frames - is there a distinction between that scene and the one you would associate yourself with?

Yeah, definitely - there's a huge difference. It's kinda like a family more than anything. We're not waiting around for Warner Brothers to knock on our door like maybe other bands out there. I'm not saying they just want to be rock stars but I would see what we do as a very different thing.

You've supported acts of the calibre of Granddaddy, Grant Lee Phillips and Will Oldham. How was that and are there any other bands you'd like to open for?

It's been amazing, particularly Will Oldham and Smog are bands I've been listening to for years and I admire a great deal and it's great to be able to meet them. I don't really support anyone I don't know, I don't believe in that. I know some people will play support to whoever they're asked but I don't see the point especially if there are people out there who really love that band and really want to play support to them. I'm supporting the American Analog Set on the 28th June in the Shelter. They're one of my favourite bands and that's a real honour.

What else would you listen to and would influence you?

It's weird how when you're younger you have the bunch that you would get influenced by - now I get influenced by a huge range of stuff - it could be electronica. I don't see myself just doing this kind of music. The Microphones who are coming over in September, David Pajo from Papa M would be a big influence on me, Captain Beefheart but I get influence from everything, the people around me, friends.

Apart from music where else do you get inspiration from?

Well I studied art and photograph. Film is also a big influence. Vincent Gallo is a big idol of mine, one of these people who can turn his hand to anything and he's released three albums under his own name and plays all the instruments on it! I just love his outlook. Jim Jarmusch would also be a big influence as well. Art as well is an interest and I did the artwork on the album myself.

How do you approach your songwriting?

I don't have a certain way and can't say I'm going to write a song tonight. I could be just passing my guitar and pick it up and write something in a few minutes. Usually the words and music will come together.

In the album there seems to be a town vs. country theme going on?

I will never say what a song means. I hate when somebody on stage goes into a "Well I wrote this song about blah, blah blah". But there is a lot of people picking up on that and I suppose if you do get away for a bit, sometimes you feel a lot more at home.

The album was recorded in a house in Wicklow. Were you in the production of it, the overall feel of it?

Definitely, but it was recorded by Anthony Mackey who plays in Large Mound and we both mixed stuff on it. I just can't stand the studio, I just can't do it. It drives me mental having a time period to work to, looking at the clock and thinking we have to get these done. I wanted to do it very live as well and wanted to be able to relax doing it so we spent a week down there and what we got done, we got done.

One of the lines from the album is "I used to sing in lot of places until I realised what a disgrace I was". When did you stop being a disgrace or was it a little bit tongue in cheek?

(Laughs) I don't think that's changed to be honest, I don't like my voice, that's pretty much what that is but I do love playing live. I mean your voice as you hear it in your head and on tape is very different but I've come to get over how it sounds. Especially when you are starting off you think in your head ah that sounds alright and you hear record it and you're like "Oh my God!"

Are you proud of the album?

Yeah, we started recording it back in September and it was due to be released around Christmas but we delayed it because of the Christmas rush? didn't want to be competing with the likes of Celine Dion's greatest hits. I was worried I might be a little bit bored with the songs by now but I'm very happy with the end product.

'Brought Four Ways Out Of Town' is released on Volta Sounds.