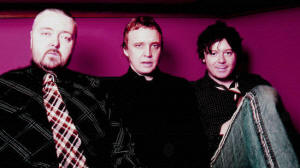 Review Snapshot:
You'll never get bored at a Pugwash gig. This is one of those rare times where is no mid-set slump, no pedestrian will-this-do batch of songs that makes the punters glance at their watches or make a dash for the bar. And if that wasn't enough they have in frontman Thomas Walsh not only one of the most gifted and under-appreciated songwriters in the country, but also the funniest. His between-song banter is as funny as his songs are exquisite. Enjoy!

Full review:
If Pugwash frontman and all-round decent-skin, Thomas Walsh had not discovered The Beach Boys and formed a band, he could have made a fine stand-up comedian. While other front men nonchalantly let the music do the talking, Walsh is eager to make us laugh too. 'This next song is about death and depression......enjoy it!' It's the pause that makes it funny and timing is all.

Speaking of timing, Walsh doesn't seem to be in the right time at all. His time is the sixties, presumably around the time that a tortured yet driven Beach Boy by the name of Brian Wilson was putting the finishing touches to Pet Sounds in the studio. More of him later. What makes Pugwash a more interesting proposition within the Irish music scene is their desire to pilfer from different sources. For them the golden triumverate of The Beatles, The Byrds and The Beach Boys provide the inspiration and information. Yet, don't mistake them for some sixties tribute band: the influences are subtle and married to a modern rock sensibility. Ultimately though, for Walsh, Brian Wilson is the King and his troubled hero hangs over the band like a ghost.

This is, of course, a good thing when songs like opener 'Something New''s delicious, sun-flecked harmonies seep forth. 'Black Dog' is the aforementioned song about death and depression, but you can't help thinking that Walsh might be getting depression mixed up with slight melancholia, the type they might have had in some hippy commune in 1967 when there weren't enough 'Make Love, Not War' placards to go around. Later, we're treated to 'This Could Be Good', their strongest composition yet, a pretty paean to some imagined summer of love a million miles from here (in every sense).

There's a distinct lack of conceited preening in Pugwash: an endearing, easy banter exists between the three band members that rubs off on the audience. But it is Walsh 's effortless ability to come up with an infectious hook, along with his humorously skewed view of life, that engages the attention. When he finishes the brilliantly inane between-song banter and gets around to singing, it's almost kind of angelic. And it takes us somewhere else: West Coast bohemia, late sixties, the last of the good vibrations before the Manson family would puncture the dream forever...On a miserably wet Saturday night in the Stables, that's some achievement.

Check out the CLUAS interview with Pugwash from 2000.