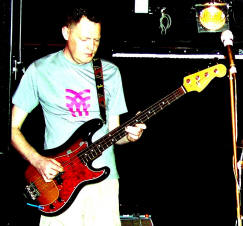 Well, it may not have appeared in Musicmaker's doorway, but it's happened nonetheless.

Distilled from the remnants of erstwhile John Peel faves Hey Paulette, and bulked up by a onetime occupant of the Sewing Room, Crumb are what melody-driven pop can be, if it paid more attention to riffs instead of the threads.

The melodies are sharp, the drums crack and the guitars jangle. What's more, tonight in the Hub there's nothing superfluous, excessive, or posing, thank Christ - just the tunes.

Grappling for references isn't too hard. If you've found yourself blowing the dust off your old Go Betweens, Replacements or Teenage Fanclub LPs recently then Crumb will get your Cons tapping.

Derrick Dalton plays his Rickenbacker like a man on a mission, his former Paulette bandmate Eamonn Devine holds everything bass-steady, and Dez Foley (once of the Sewing Room) snaps and crackles on the kit.

Truth to be told, before I hit the Hub someone has passed on a couple of Crumb's MP3s. Most of their tunes come in under four minutes, all nipping beats and driving bass, topped off with some economical Marresque guitar work from onetime Mexican Pet Dalton.

The highlight of the set is the sublime 'Wrecked Or', which comes off like sweetest melody Forster and McLennan never wrote.

A upbeat melancholy characterises much of the evening's output. The lyrics allude to old girlfriends, good times, places and people, coming and going - all the misty mellowness with none of the clich?.

Discrete enquiries afterwards revealed that the three piece are currently recording an album's worth of material. With no date yet set for release, and few live shows scheduled for the immediate future, Crumb seem intent on retaining an air of mystery.

With tunes like these, though, that can only last so long. Catch them if you can.