A review of the album 'Songs From Stamford Hill' 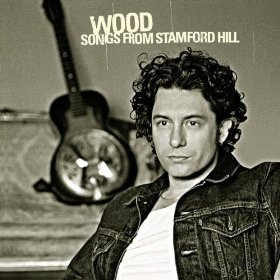 Dawson's Creek Soundtrack. These three words are all you need to know about Wood  led by English singer-songwriter James Craddock) and their debut album, Songs From Stamford Hill. Like the TV show, the record is overly sentimental, mature beyond its years but well-crafted and undeniably addictive.

Wood, like Bush (is there a pattern here?), are a British band that found their fortune in the States. After scratching around London for a contract, all that was required was a 20 minute set in the Columbia Records Executive offices in New York three years ago for their future to be secured. It's really not hard to hear why - the record's spiritual touchstone is obviously Neil Young's classic "Harvest" and you would be hard-pressed to find anything remotely 'Brit-pop' about it. Acoustic guitar, piano, harmonica, Hammond organ all flow in and out of the mix, the melodies are slow burning, the musicianship expert.

The first single, "Stay You", kicks off the album and is the closest Wood come to rabble-rousing. A strong melody and catchy chorus that really kicks when played live (I saw them support The Jayhawks in London last year). The song appeared on the Dawson's Creek Soundtrack album and is easily their best tune. Unfortunately, the record never quite hits this height again. "Straight Lines" is a minimalist blues riff, with breezy vocals and light airy guitar. The closing track, "Never Ending", reminds me of Springsteen's "Bobby Jean" and is a nostalgic trip down school-days memory lane.

Wood are obviously pretty far from the manufactured pop that litters the charts these days and that is a good thing. But in aiming for that 'timeless' feel, Wood sometimes sounds a little old but, as Travis have proved, there is a place in this country for acoustic songwriting and melody. I guess I just feel that the Americans do it better.