A review of his album 'Neosupervital' 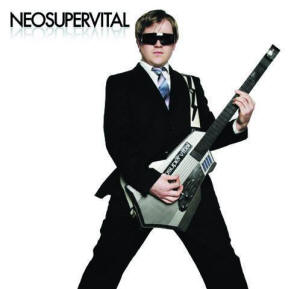 The CLUAS Verdict? This album has been determined to have a soap box inertia/drag coefficient of 7.710056 out of 10

Full review:
Neosupervital, amongst other things, is a guitar legend. A pretty strange statement to make about an electropop artist, I know. He's not a guitar legend in the traditional note-perfect bluesman/shred-god sense, but he is doing for the Casio DG-20 Midi Guitar what BB King did for the Gibson ES, Buddy Holly did for the Strat and Tommy Iommi did for the SG; and that is to make it his own, and make it cool. It certainly gives his live performances a dynamic that might not be possible behind a keyboard. The question is, does it mean he can make a good album? After all Joe Satriani knows his way round a fretboard but that doesn't mean you'd want to listen to "Surfing the Alien" on continuous repeat.

Such is the immediacy of the songs, it doesn't take long to realise that it is indeed a very good album. It's filled with the same endlessly positive, hooky, fun electropop we've come to expect. It's perfect Saturday night feelgood stuff. If anything though, it might seem a little too familiar. Four of the twelve songs here have already appeared on previous EPs/Singles released as far back as 2002. That said, the versions that appear on the album are all re-recorded and are without doubt superior giving far more clarity and punch to the sound without removing appealing quirks like the way the bass is allowed to sit almost (but not quite) too high in the mix. It's not just superior production and mastering that makes the new versions superior, the fat has been trimmed in terms of editing and arrangement. "Jazz Fascist" for example was originally a little languid, the new version has the snappiness its humour deserves.

That feeling of familiarity crops up its head on much of the new material too, it never really strays into unfamiliar territory. Sonically it doesn't push things forward for electro or sound stubbornly individualistic in the way his contemporaries from Berlin or Detroit do. It doesn't stop you enjoying it though. Neosupervital's music should be thought of like a home-made go-kart or soap box racer. Incredible but brief fun, when you get to the bottom of the hill, you immediately want to go back up for another go. Eventually you will get tired of it and want to do something else, but that's no reason to knock it. In fact like soap box racing, the only adjective to accurately describe this album is "wheeee!!". Of course the more literary Cluas writers will tell you that "wheeee!!" isn't an adjective. I say they haven't been down a forty-five degree slope in something with no brakes, held together by only a crude knowledge of engineering principles and boundless optimism often enough.

Of course, it's not all uplifting stuff. There is one song; P.H.B. (Pathetic Human Being), the concept of which, according to the PR bumf anyway, was rather than filling an entire album with negative angst, Neosupervital would fit all his annoyances in life into one song. This idea is pure genius, it means not only are we spared a slit your wrists in your bedsit album but the resultant angsty song will cover such a wide range of stuff, everyone will find something they can identify with in it. I've illustrated this using pie charts below.

Here is a diagram of Neosupervital's angst based on the lyrics of P.H.B. 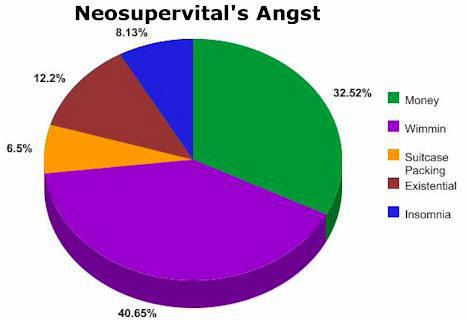 Now compare this with a pie chart illustrating my personal angst below: 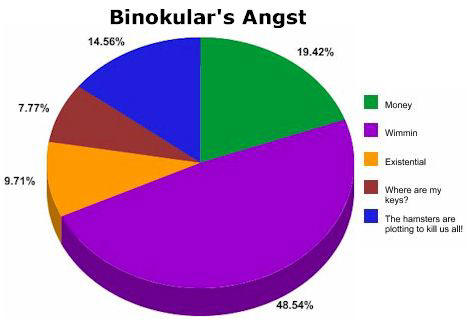 (There are differences, like the fact that being a musician means Neosupervital has to worry more about being chased by his bank manager. I on the other hand am a spineless weasel working for "the man" and therefore have a measure of financial stability, but overall it's pretty clear there's quite a bit of an angst overlap. The bit about the hamsters is a joke of course. It's actually the gerbils, the furry malevolent little gits.)

Hardly an earth-shattering album overall, but definitely one worth your attention, even briefly. If you don't buy this album, please at least do yourself the favour of seeing him live at least once. It's pretty much guaranteed you'll have a good time, and the man deserves your support, not least for making Midi Guitar cool whilst simultaneously annoying Bono by trumping him in the "most stupid sunglasses in Irish music" stakes (probably).

Check out CLUAS.com's review of Neosupervital's live in Paris in June 2007.