A review of the album 'In Reverse' 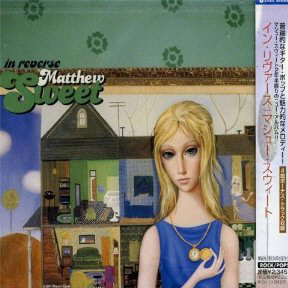 Savage downsizing was a feature of many industries in the last decade, and music was no exception. Keyboards, backing vocals, strings - they all bit the dust, and it got so bad that Sydney band The Fauves released a track entitled 'Everybody's Getting a 3 Piece Together'.

In these troubled times then, thank heavens for Matthew Sweet. His seventh long-player 'In Reverse' often reaches orchestral levels - up to 17 band members on some tracks - with Theremin, Euphonium and Flugelhorn all getting a run. Yes, the first person who knows what they are gets a free cluas t-shirt. Right Eoghan? (Uh, I suppose so but only if somebody can also tell me where my copy of Emmy Lou's 'Wrecking Ball' has disappeared to <wink>, eoghan).

Generally, this kaleidoscopic blend works quite well - the man has obviously grown up in California. Musically, 'In Reverse' is well suited to good weather, Martinis and a beach view. Well, take your chances anyway. Sure the Beach Boys were huge, and there's more than a hint of them here, with harmonies and a lot of sonic experimentation.

Lacking obvious singles, 'Future Shock' perhaps being an exception, 'In Reverse' generally meanders along without making too many loud noises - guitars backed up by the aforementioned trombone, trumpets and so on. Probably the most notable contribution is from Greg Leisz, on loan from kd Lang's band, adding pedal steel guitar and a few country edges.

One caveat however. For a man that covered the Scooby Doo theme, Matthew Sweet is pretty downcast most of the time. Every song is about a break-up of some kind. It would be nice to hear him sing about trees, birds, or even driving his car. But you feel he'd rather get back to the love of his life and associated problems anyway. He seems that kind of guy.

Best not listened to before going out on Saturday night perhaps but otherwise, 'In Reverse' makes the grade.