Review of his album 'Up here' 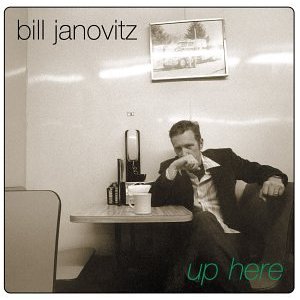 Bill Janovitz is famous to most as the front man of Boston three piece Buffalo Tom. On this, his second solo outing, the shadow of his day job is rarely visible. The opening songs, 'Atlantic' and 'Best Kept Secret', find Bill on his own with his acoustic guitar, a far cry from the feedback drenched early days of Buffalo Tom. Indeed, the entire album showcases a much more intimate and folky side to Mr Janovitz, whilst not being quite as countrified as his previous solo effort Lonesome Billy.

The majority of the songs on display here evoke such peers as Neil Young (circa Tonight's the Night) and Tom Waits, to name but a few, without ever losing their individuality. The album is a stark, bleak affair but not without it's fair share of beauty. 'Like Shadows', 'Half A Heart' and the title track are all gorgeous folk tinged ballads along similar lines to tracks such as 'Postcard' and 'Wiser' off Buffalo Tom's most recent studio album, Smitten. When the mood does lift, it does nothing to tarnish the wistful sadness of the record.

Goodnight, Wherever You Are features a catchy staccato guitar line and divine backing vocals from Fuzzy's Chris Toppin (who also features on the wistful 'Half A Heart') but is no less desolate than the slower numbers present. With Buffalo Tom on a self imposed hiatus this is the closest we may get to new material for some time. Unfortunately the low key release of this album means that it is unlikely to win either Bill or Buffalo Tom many new fans. They have been largely ignored by the mainstream for the majority of their careers. But for the people who already know and love them, this is a real treat and a testament to the man's songwriting prowess.