It's a hot night in Munich and we're standing two thirsty hours in the sun to get a front row berch. But the meatloafed security men have the front of stage crowd-pit closed off by the time most of us early birds get inside the huge Munich's huge Olympic stadium. Inside the second ring, we at least cornered a space by the barrier to lean on for the next few hours. Thirsty work it was and the beer hawkers were making a killing. Rip-off vendors and a totally over-manned security force of the Rambo-for-a-day variety soured the atmosphere tonight and there was little shade from the sun. 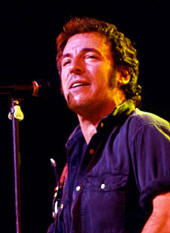 There was some shade by the time the Boss was driven backstage at 8.15 - this stage was at the west side of the Olympic Stadium and so a line of silver vans led by a big black merc ferried the crew from their dressing rooms, allowing fans at the left side of the stage get a paparazzi's peek at the band as they made their way to the stage. The Boss mounted the stage alone, carrying his acoustic steel guitar for the by-now customary raw and angry version of 'Born in the USA', the song rescued and redeemed from its earlier bombastic, flag-waving misinterpretation.

Springsteen looked on a physical peak: tanned, energetic and focused. Band aboard, it was time for 'The Rising' and straight onwards to its album partner, 'Lonesome Day'. It was only then that the Boss took a moment to practise his German. Judging by his slips into the vernacular tonight it seems he's picked up an elementary level of one of the world's harder-to-master tongues.

A string of golden oldies followed the guten nachts, 'Jackson Cage' making way for the most potent combination of the night: 'Ties That Bind' and 'My Love (Will Not Let You Down)'. A cacophony of different accents carried the tune from the pit - die hard Bruce-heads tripping around Europe to compare shows - but the man himself was on a vocal high-point. The E Streeters' playing was stopwatch-tight and the value of the latest addition to the group - violinist Soozie Tyrell - prove her worth on the new tracks she'd been brought in to bolster in the studio, namely 'Empty Sky', the sublime 'You're Missing' and the party-rocker 'Waiting On a Sunny Day' (a song that's been labelled the gayest thing Springsteen's ever recorded, one can certainly see it working on a Eurovision warm-up party).

More traditional was 'You Can Look (?But You Better Not Touch)', with the Boss trading vocals and skits with growly Little Steve Van Zandt. 'Sherry Darling' was the other concession to the "Born In The USA Tour" t-shirt wearing diehards before the ethnic sounds of 'Worlds Apart', the most difficult of Springsteen's recent work to bring to the stage. Far more recognisable however was an all-out 'Badlands', paired perfectly with 'Out In the Street', both delivered in blistering tempo, Max Weinberg's drums never sounding more authoritative. '10th Avenue Freeze Out' got its first outing of the tour so far before 'Further On Up the Road' prefaced three classics: the surprise packet of the night: 'Bobby Jean', followed by 'Ramrod' and 'Born to Run'.

'Seven Nights to Rock' is a rollicking, good-time 'Moon Mullican' tune that's become a staple on the Rising tour. It showcases the band's collective strengths, old-style rock n' roll heritage and jazz diversions like no other song and piano man Roy Bittan kept a 3-minute stomping boogie up until the band walked back on stage afterwards for the final encore, opening with 'My City of Ruins' before moving on with 'Land of Hope and Dreams' and wrapping up with a fiery 'Dancing in the Dark'.

Twenty-six songs and almost three hours later, Bruce and the best house band in the world drove back out towards the dressing room. The parting was magical. As the crowd strained to see him through the blacked out windows of the Mercedes limo, Bruce pushed his head through the sunroof of one of the silver people-carriers bringing up the rear. The stadium lights were on full, it could have been a victory lap, the "homecoming" out of Jungleland. The crowds rose from their seats with a swelling cheer as they recognised the man waving a baseball cap. They saluted, he saluted. It was a triumphant night.